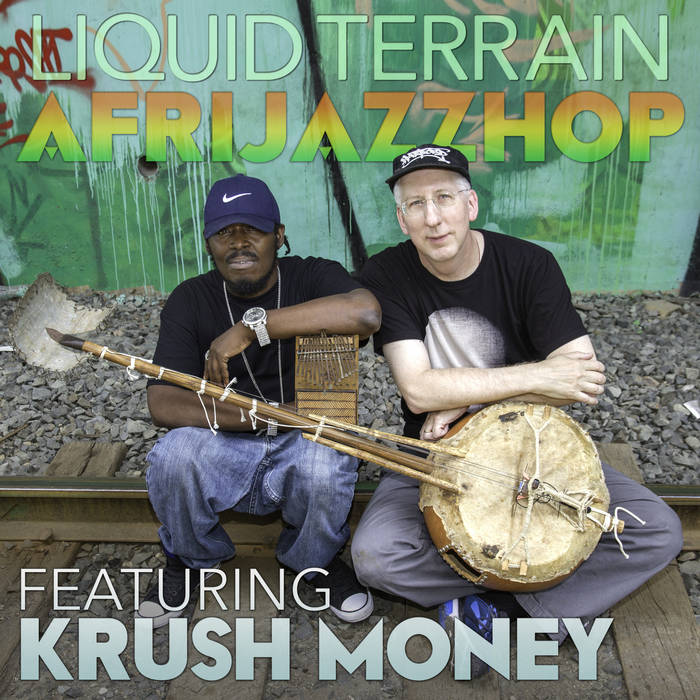 Krush Money (Myron Moye) and I met In 1983 when I co-produced a breaking and popping dance contest in Hartford, Connecticut, where he and his crew, The Master Poppers, took first place (he became a state champion in 1984). For a few years I helped manage and book him and a group of all-star b-boys. In the following years, he turned from dancing to rapping, and after hooking up with the extraordinary DJ Kutmaster B-stro (Kevin Bell), formed the Busy Boys.

Krush Money and B-stro asked me to engineer and help produce some of the Busy Boys' first studio sessions, many of which were released on the Bee-Pee and B-Boy record labels, including the classic (now old-school) tracks "Stop Jockin Me" and "Funky Fresh Christmas."

Over 30 years later we joined forces again--this time with Krush Money enhancing my beats and instrumentals with his rhymes--and AfriJazzHop happened as if we had been working together for decades. Kutmaster B-stro, who died tragically fighting a fire in 2014, is honored on the track with samples of his scratching from our early work together.

Afri Jazz Hop is Hip Hop and jazz, mixed with a little African pizazz.
It's when the Hip Hop drums meet the crash, and the African percussion sounds sweet with the scratch.
Lyrically I'm a beast, I'm from the streets of the past.
All the rappers pay attention while I'm teachin the class.
Liquid T gotta a lot of rare beats in the stash, producin nothin but the hits out on the streets is a smash.
I'm speakin it real and you speakin it trash.
I'm a Hip Hop head with CDs in the dash.
Drive a hundred miles an hour up the street and I'm fast.
Plus the music got me hyper in my seat if I crash.
It's for the love of Hip Hop because I believe in the craft, that's why I'm doin it for the culture without receivin the cash.

Afri Jazz Hop is doin somethin to me, cause I love the Hip Hop drums over the dousn' gouni.
With the jazz piano chords, music be flowin through me, so melodic to my soul and my spirit that's how it do me.
Put the rhythm in the hips of the women shakin their booty.
T's on the production, yo homey doin his duty.
Another Hip Hop track only this one's a doozy.
It's the fusion of the culture that African music move me.
The creativity and the pasion and that's the beauty, originality and that's comin from your truly.
A Hip Hop soundtrack but there's no movie, only me and Liquid T we the stars, no George Clooney.
I spit it rapid fire with no Uzi. Make the girls go wild.
Don't believe me? Then ask your cutie.

Tim Wolf, a musician and photographer, describes his work as liquid terrains: fluid landscapes. He has studied Indian classical music, practiced disciplines of improvisation, and worked as an audio engineer and music/performance producer. Formerly a saxophonist and vocalist, he now performs on several traditional African and digital instruments, and is a member of the New London Drone Orchestra. ... more

Bandcamp Daily  your guide to the world of Bandcamp

Serena Cherry debuts her black metal project, plus a Pick from the Crypt block from Svalbard